Isaac dropped by on Thursday to update us on his progress with his lightsaber.

He has it all glued together – next the painting!

Today was a no school day, so there was a lot of action at the library with over 40 patron visits!

The 3D Printer also ran constantly today. We are excited to see a student attempt a multi piece project – the Lightsaber! The saber was printed in six files with sometimes up to three items printing at once. Isaac loaded and sized his project on his home computer, bringing the files in on a flash drive. After loading on to our program, I double checked the filament side (PLA) and added a raft to each piece. Originally, we planned to print the small pieces without the raft but were unsuccessful. If they are too small the filament doesn’t adhere to the bed which results in a jumbled mess. Here the small parts have been printed and we are watching the lightsaber’s handle print. This was the biggest file taking an hour and a half to print. The whole project took just over 3 hours for all six files.

Isaac will be taking the pieces home to glue together and paint. You can see that he has removed some of the raft on the small pieces. He will be researching adhesive and paint options – check back to see the finished project!

Drop by and print a project of your own!

Yesterday and today the 3D printer was finally behaving appropriately with the corrected settings and clean gears and nozzles.

A complete print of the minion was made from both sides with both filaments. PLA (Polylactic Acid) is is a biodegradable thermoplastic aliphatic polyester derived from renewable resources, such as corn starch. ABS (Acrylonitrile-Butadiene-Styrene) is an opaque thermoplastic polymer material made from the monomers Acrylonitrile, 1,3-Butadiene and Styrene. Strong and durable even at low temperatures, it offers good resistance to heat and chemicals and is easy to process.

The blue spool is PLA while the white spool is ABS.

Yesterday we printed with PLA with the left side. This blue minion took 2 hours and 45 minutes to print. PLA has a lower temperature setting than the ABS which was the main source of our problems. 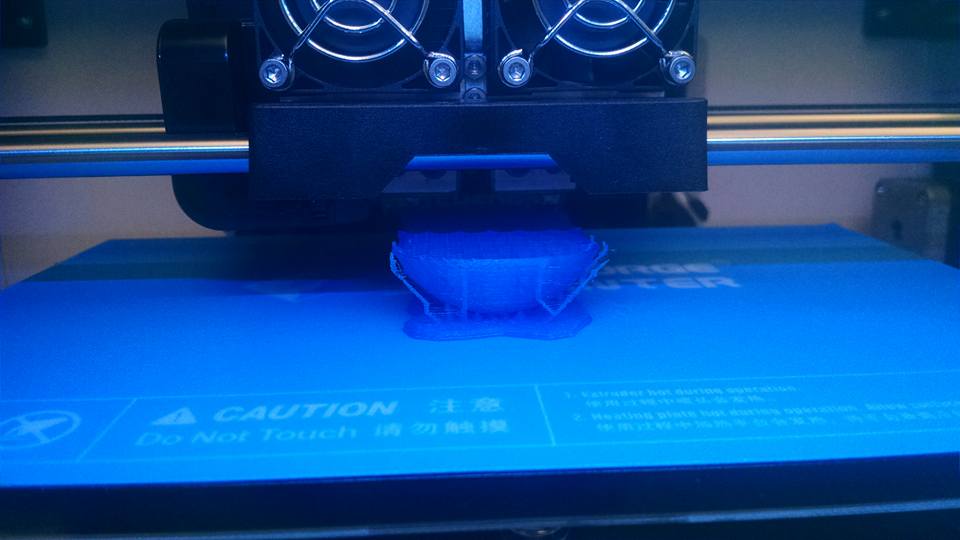 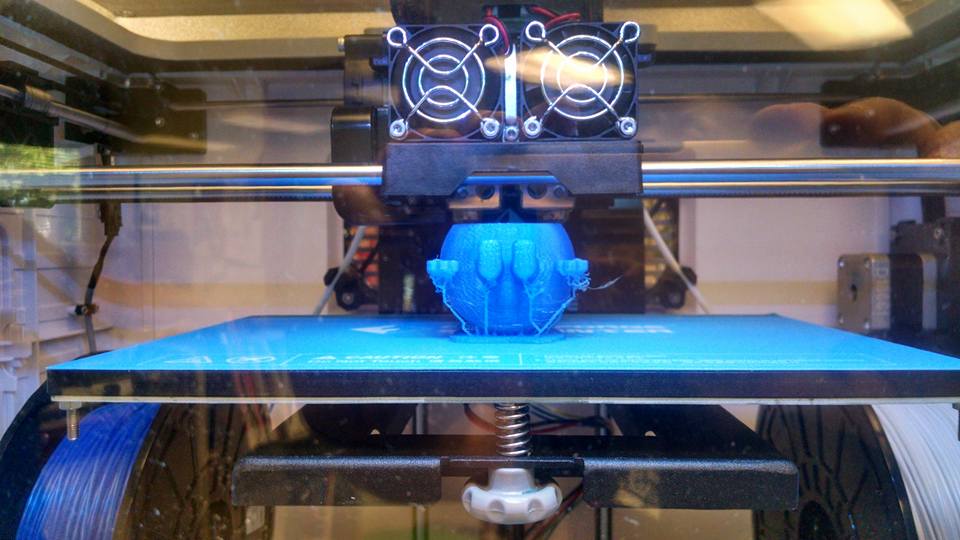 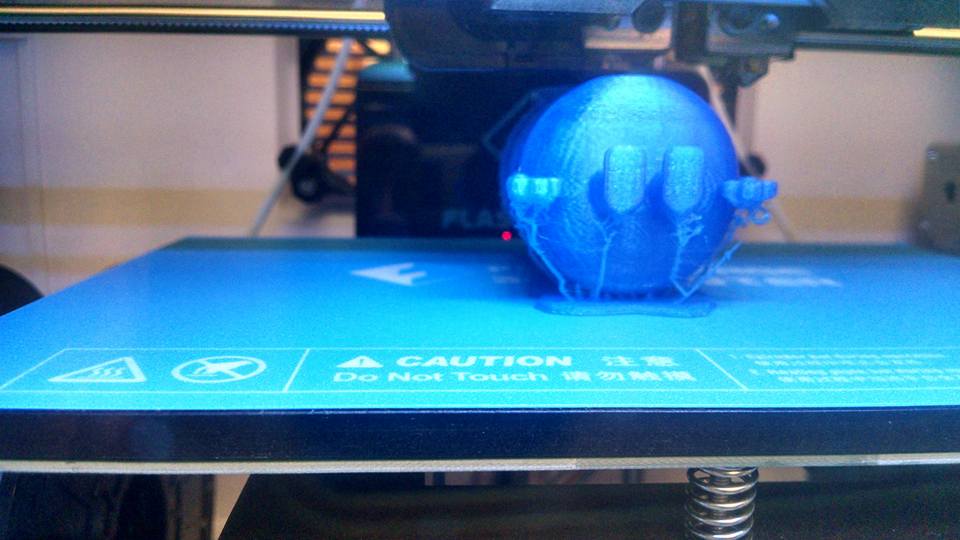 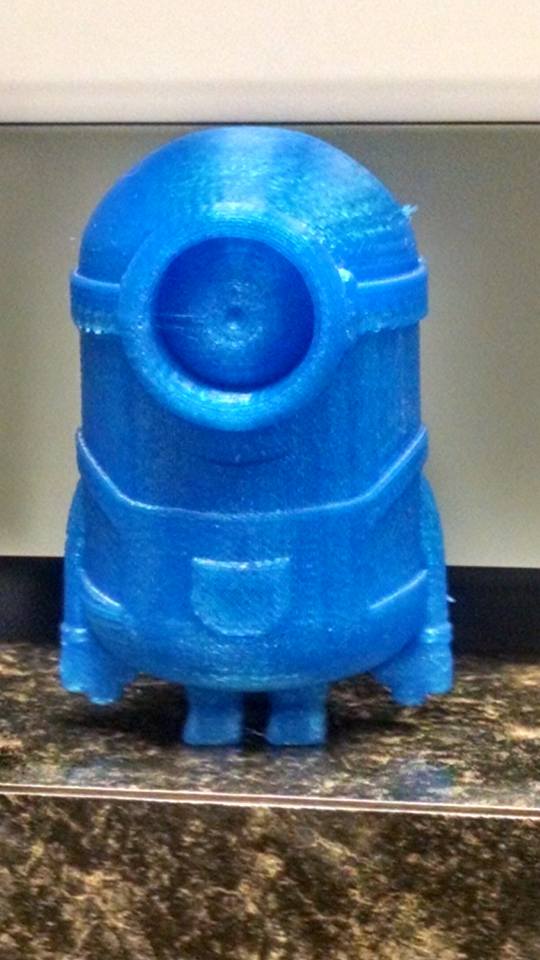 Today was also a successful day with a complete print from the right side, the ABS filament. The white minion took 2 hours and 20 minutes to print but is a little smaller. 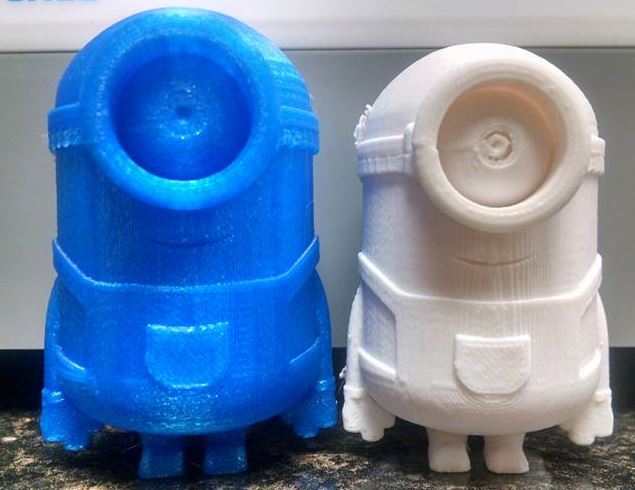 Had to go a little deeper than before to get it unstuck.

The new 3D Printer arrived Thursday, Sept. 22. After set up we printed the test sample: 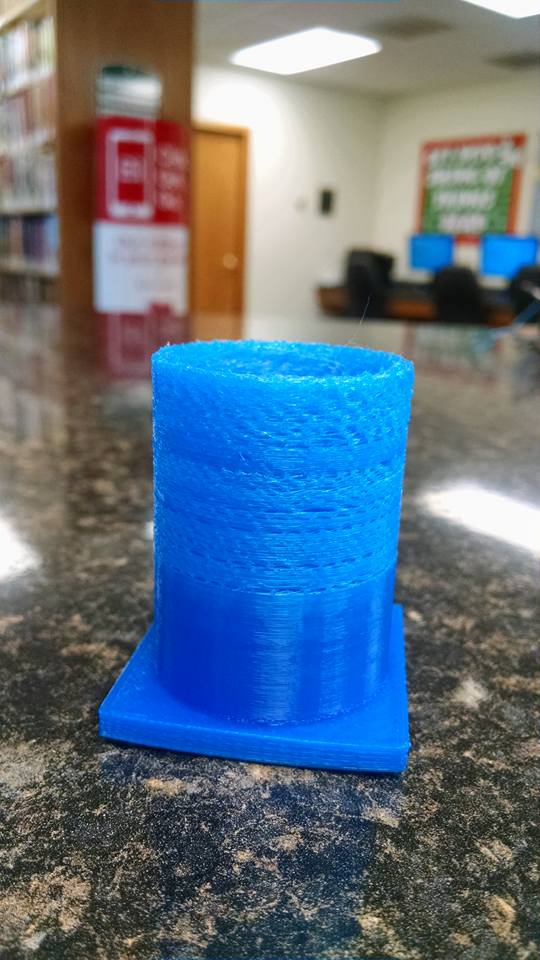 Next a Minion was attempted. Because the Minion moved on the print bed, the print failed. The supports were also configured incorrectly.

Pistol Pete, a workshop project chosen by a participant, made it through a complete print. The default dimensions need to be adjusted as it is very fragile. So fragile, that it was nearly impossible to remove the support base.

Next returning to the blue filament. An attempt at a Mocking Jay ornament also chosen during the workshop, resulted in the realization that the blue feed/nozzle is in trouble. Eventually it there was no filament extruding. 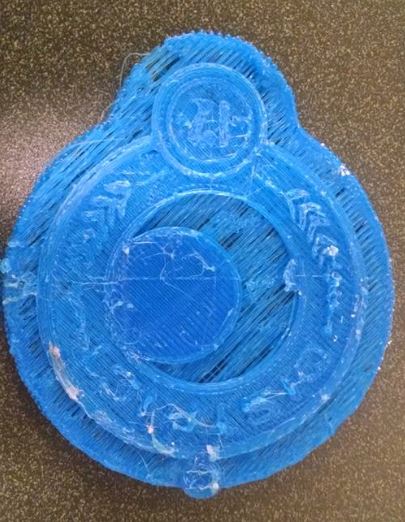 Fearlessly, the nozzles and gear feed mechanism was disassembled. The blue filament should go straight through the mechanism, not curl around the gear. 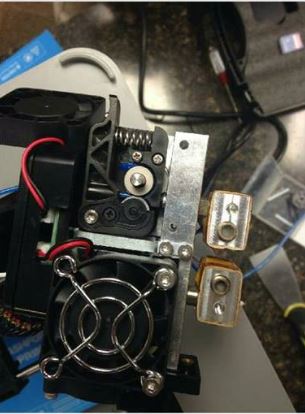 Everything was put back together. Then a second attempt was made on the Mocking Jay. 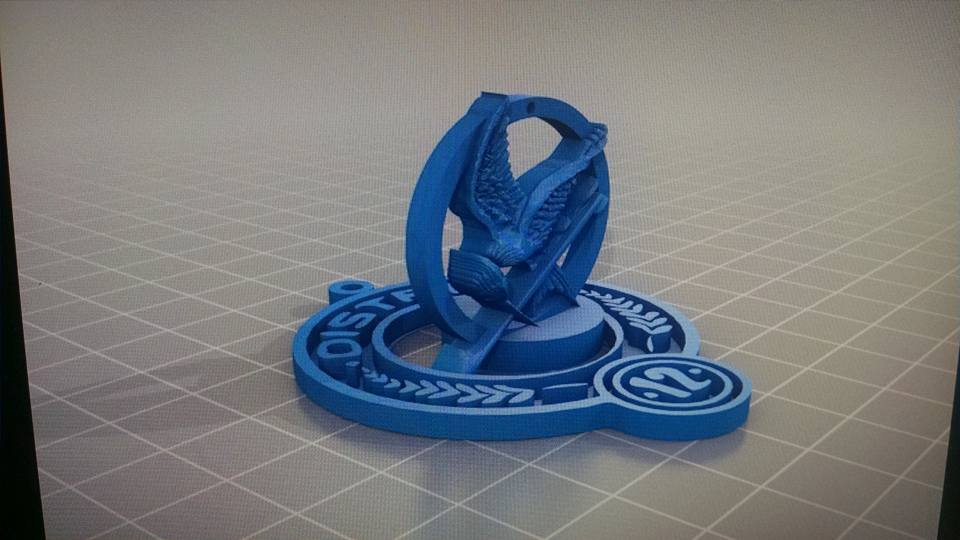 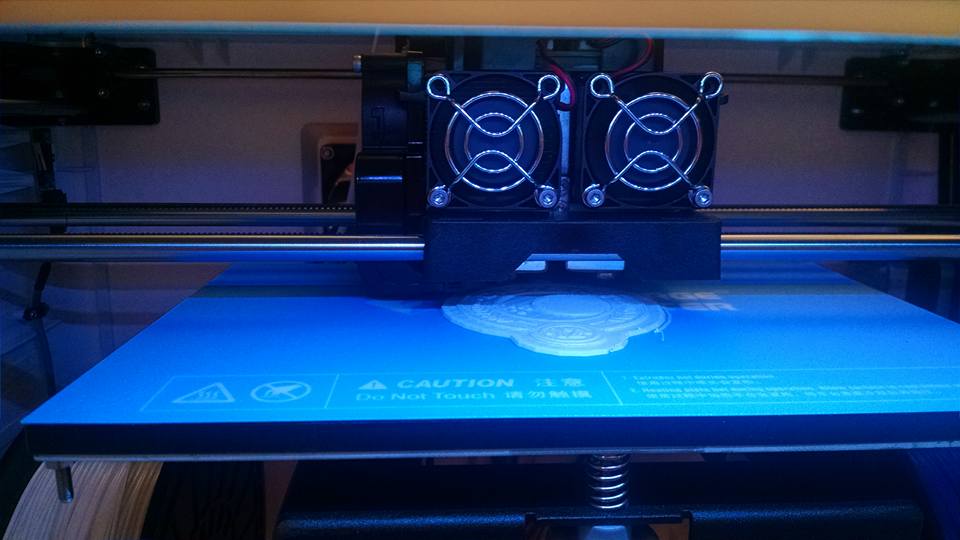 Then there was a “network error”! 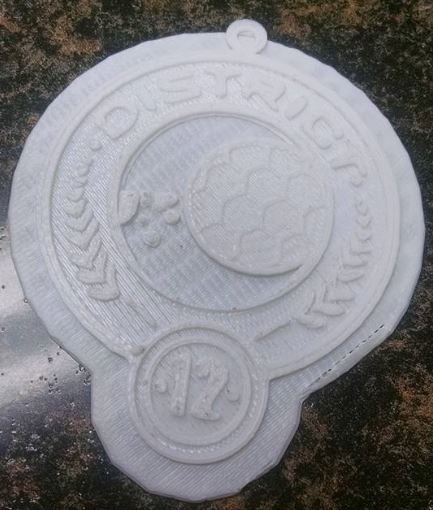 Sometime was spent discussing the issues with the tech. consultant Mr. Tang. 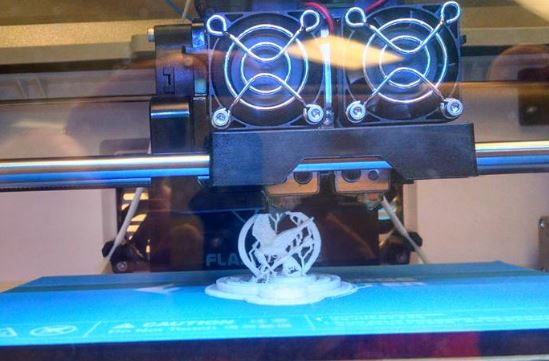 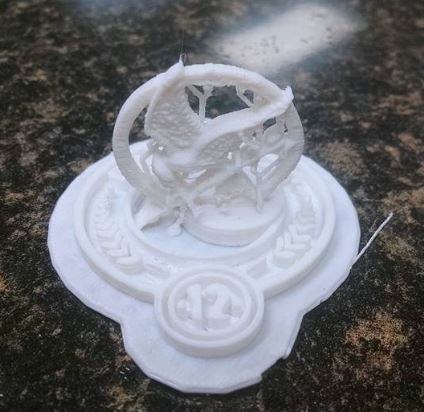 An attempt was made to use the right extruder. This resulted in: A mess…. it is probably blocked again…

E-readers! Changes are coming!. For Mobile apps (KINDLES!, Android devices and etc.) & ChromeBooks – week of September 19th. 3M Cloud Library is becoming “Cloud Library”. The icon will change and you may need to do a uninstall and then reload the new app. Please follow this link for further information: https://kslib.info/Blog.aspx?IID=295